A friend of mine, Patrick Brown, shared this cool little video with me.

From The Camera Store in Calgary. I like it.

The Nikon F, an iconic and beautiful camera.

I have been invited to Judge the Nikon International Photo Contest in Tokyo in February. I am really looking forward to it, as I have not been to Japan since shooting a two week assignment for Le Monde during the World Cup in 2002. This was officially the first time I was required to use a digital camera in order to meet the paper’s deadlines. A Nikon D1x had been shipped from Paris to Tokyo and was waiting for me when I arrived. Learning how to use that new technology on the job was both an eye-opener, and a glimpse into the future. My very first camera was an FM. My second an F2 (with motor-drive attached it looked like a block of flats). I have always relied on Nikon, adding a Leica for those times when getting the shot required discretion. Now if I can only convince Nikon to put their impressive D3s technology inside a silent rangefinder style body with a 35mm f2 lens. What an addition that would make to an already influential lineup. 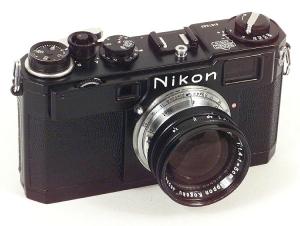